skip to main | skip to sidebar

This blog's purpose is for me to keep a garden journal of sorts. To detail some of the things that I accomplish in the garden and a little of what I do in my home as well. It will also be a place where I will post the photos that I love to take so much. Maybe a place to post my overflowing of pictures that I particularly like or find artistic. Some posts will be wordy...and some may have no conversation at all. Just a post to bring back to mind a lovely day or a meaningful memory. I have disabled the comments on this blog, but feel free to e-mail me for any questions about what you see here. My e-mail address can be found in my profile.

On January 21st my husband got a call from one of his ranching friends wanting to know if he would help
gather cattle that day.
That morning we finally had a snow storm and the cattle which had been on pasture up until then
would now be out of feed and needed to be moved to where they are fed for the Winter.
In a normal Winter they would have been on dry feed much sooner than this,
but because there was no snow, they were able to be on
pasture all the month of November and December. Very unusual for us.
The cattle were moved five and a half miles and since they were going right in front of our place
I decided to grab the camera and get some shots of my husband and his friends.
By this time it was raining and the cowboys, herding dogs and cattle were getting very wet. 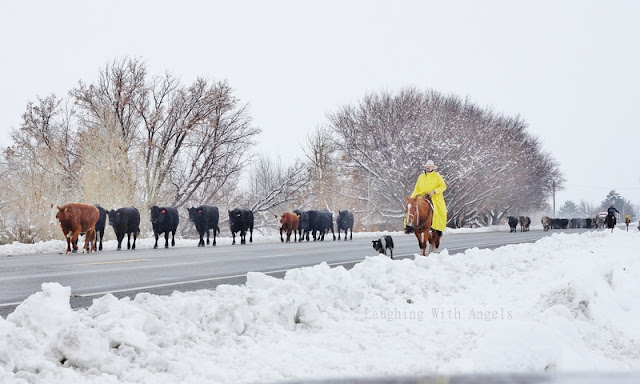 This is Brad and his border collie Sparky and horse Duke. 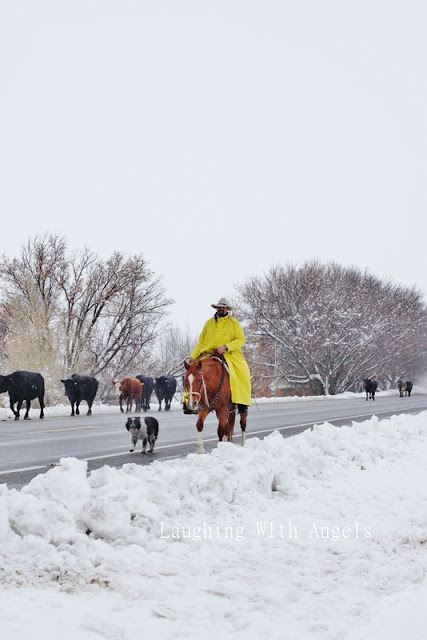 I love how the body heat rising off the back of the cattle makes
a mist above them. 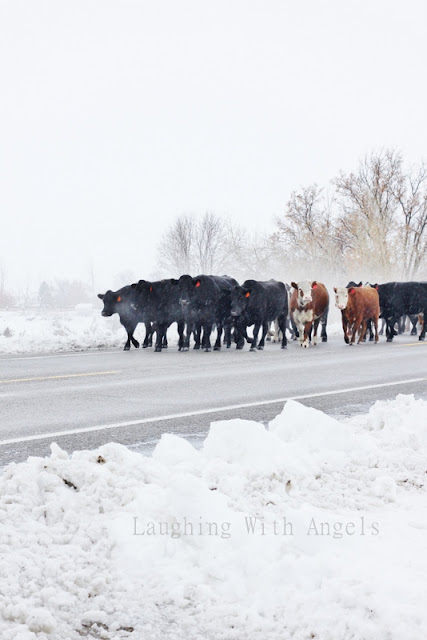 Here comes Dale and Sunny.
And the rest of the herd.
The cattle were strung out for a long way and the traffic could get through easily.
Unlike when they are all bunched up. 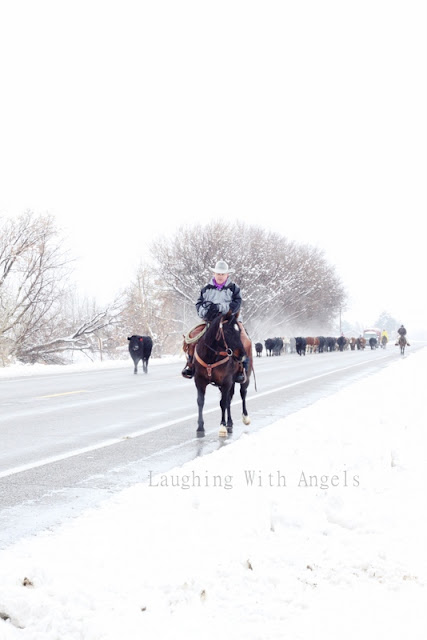 This is Clayton and his horse Sherman. 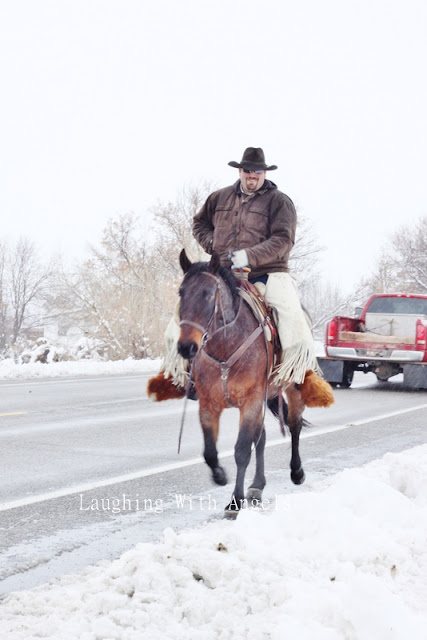 The end of the line. 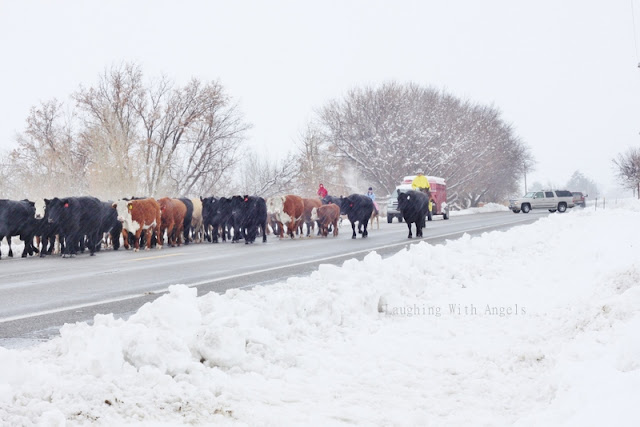 These mama cows will all be calving in about three weeks. 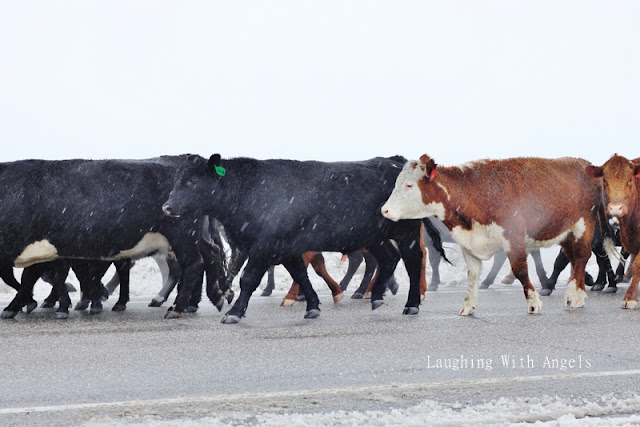 This is the better looking side of Brad. 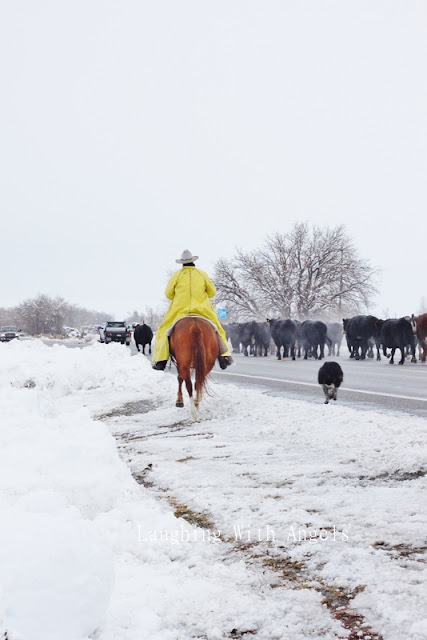 A few late comers to the party. 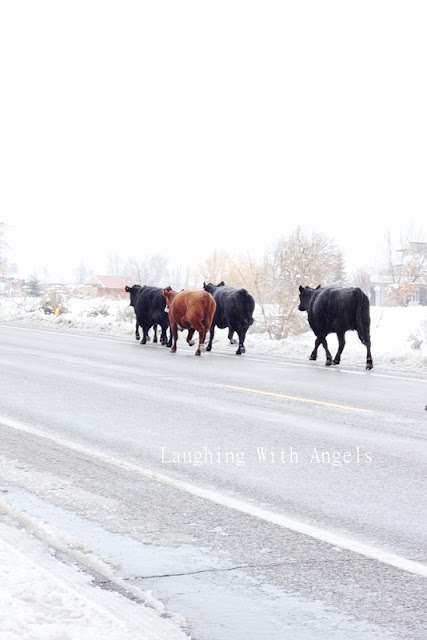 Below is Rick on his horse Hancock.
Rick owns the cattle and today they moved about 120 head.

Bringing up the rear are Brad's children Wyatt on Chocolate and Katie riding Trigger.
This border collie is Stubby, who belongs to Rick, the rancher. 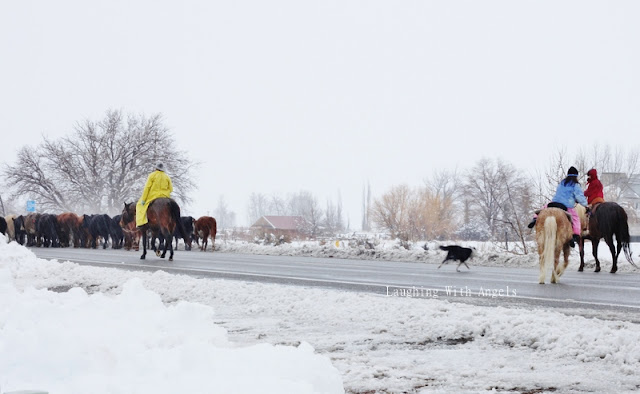 Katie and Trigger made it most of the way.
Pretty good for a cold and rainy day! 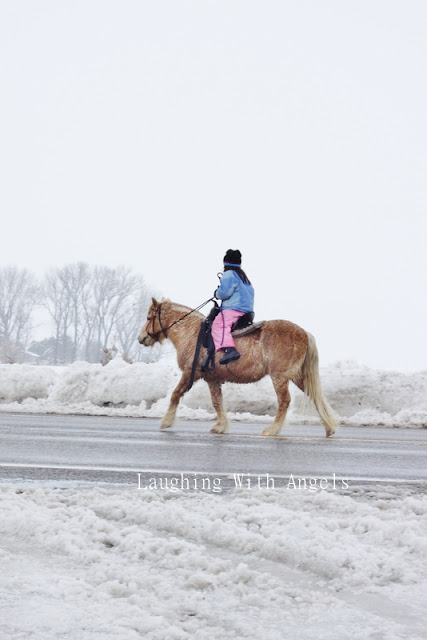 June
I am a 60 year old mother of 6 who all but one are on their own. Our youngest is a beautiful 29 year old son who happens to have Angelman Syndrome, thus the name of my blog! One of the hallmarks of the syndrome is their happy nature and frequent laughter and constant smiling. He makes everyday a joy!